Not surprisingly, food that’s good for you is also good for the environment. 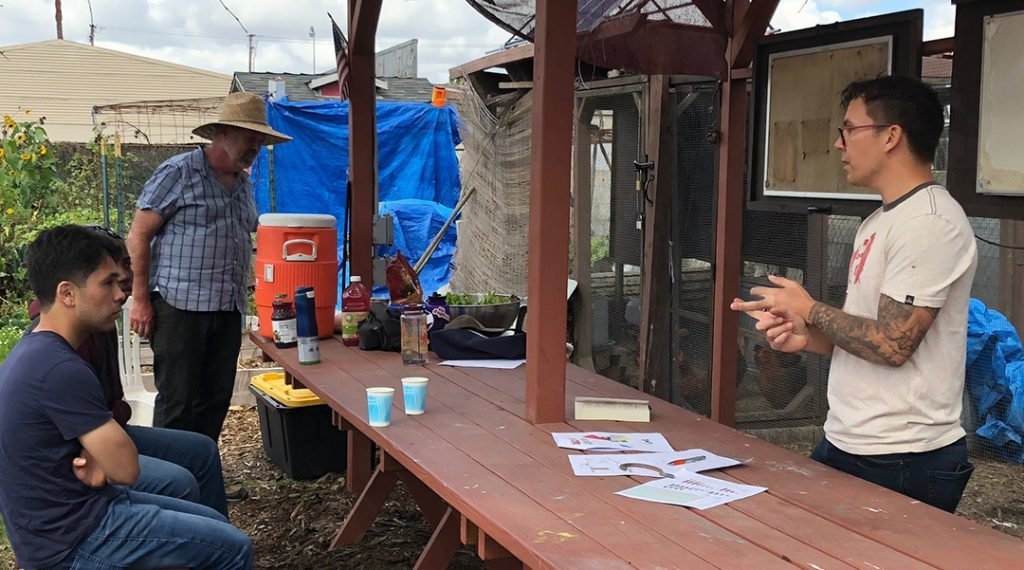 Guy Denton, right, provides information on sustainable nutrition.Locally produced food has a reduced environmental effect because fossil fuels associated with transportation are taken out of the equation. “There’s a big push on locally produced food,” said Denton, a gardener at LBO’s Orizaba Park Community Garden who is working toward his credential as a registered dietician.

Also popular is organically produced food, which represents the fastest-growing agricultural sector. “In a capitalist culture, we vote with our dollars,” Denton said.

The Mediterranean Diet, with its emphasis on leisurely social meals with limited meat, remains a good option. “Plant-based diets are the best diets for the environment—and for health. Vegans have got it right,” he said. “Definitely plants are the future.”

The U.S. Department of Agriculture’s Choose My Plate dietary recommendations, updated every five years, offer sensible guidelines. According to My Plate, each day, people should consume up to:

Initially, the 2015 Dietary Guidelines Advisory Committee, a group of nutrition, medicine, and public health experts, suggested that a diet higher in plant-based foods and lower in calories and animal-based foods would be healthier and associated with less environmental impact than the current U.S. diet. However, their recommendations were opposed by food industry lobbying groups.

Denton said 2015 was the first time the guidelines considered sustainability. He said the current U.S. diet has an overemphasis on meat, starches, and eggs; however vegetable consumption is only 10 percent of recommended guidelines.

Recognizing that there are many eating styles—including vegetarian, vegan, and flexitarian—he said the most important thing is to “pick a diet pattern that works for you and go with it.”

Among his other recommendations:

One rule of thumb is: “If bacteria doesn’t want to eat your food, maybe you shouldn’t eat it.”

There needs to be a change in the way we produce and consume food, he said, since Americans waste two-thirds of food produced. Planting a garden plot is a step in the right direction.

“If you plant a garden plot, you’ll do a lot,” he said. “If everyone adopted a healthy eating pattern, the world would be a better place.”