Not every girl can boast of having her own beesuit, but Cordelia Laplume can. The 7-year-old has been coming to Long Beach Organic’s South 40 Community Garden for three years.corel 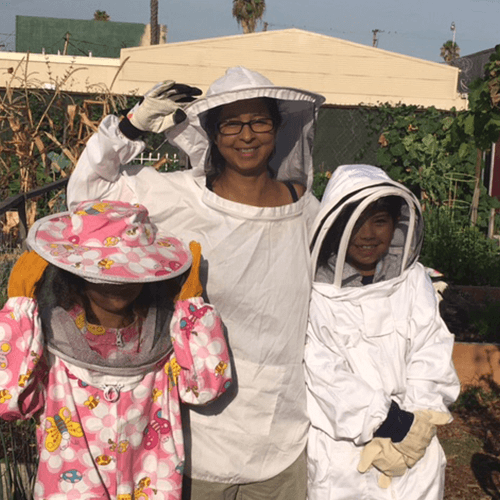 Di Laplume, daughter, Cordelia, and friend Pearl, right. “We come for the bees,” says Di Laplume, who home schools her daughter. On Sept. 2, the mother and daughter, along with Cordelia’s 8-year-old friend, Pearl, (pictured right), were at the garden to attend the monthly bee workshop led by Terri Owens-Clark, a Master Beekeeper, LBO Education Director, and Education Chair for Long Beach Beekeepers. Owens-Clark is also known as “the bee lady.”

Like many in attendance, Di and her daughter want to get their own hive. But before they do, there’s more to learn about caring for their yellow-and-black striped friends.

Owens-Clark guided would-be beekeepers about suiting up and lighting the smoker that calms bees while their hive is open. You should always have a reason to open the hive, recommends Owens-Clark, since the disruption can set the colony back several weeks in honey production.

Most beekeepers are in it for the honey. Always make sure not to take it all, since that’s the bees’ food. Although local bees can overwinter without problem due to the region’s temperate climate, at the end of the summer there are fewer blossoms they can draw from for nectar.

“Leave them something to get them through the winter,” said Owens-Clark, who became interested in bees years back when she found a hive in her compost heap.

Beekeepers also need to be aware of the queen. She usually dwells in the lower frames, where she lays the eggs. As the only egg-layer, she’s key to the hive’s survival. And if you spot a queen egg, be extra wary, since hives producing a new queen are prone to swarming.

The South 40 event also featured a chicken workshop led by Roberta Kato, who has a flock of about 20 chickens, in addition to dogs, cats, bunnies, and ducks. If you’re interested in raising chickens, it pays to think about what kind of chickens you want and where to get them, said Kato, who is a Master Gardener, Program Director for Long Beach Beekeepers and a member of L.A. Urban Chicken Enthusiasts.

There are four main types of chickens: Bantam, Fancy, Large, and Layers

Small and feisty, Bantam chickens are often used for fighting. Fancy chickens, such as the Frizzle, Polish, and Silkies, are prized for their exotic looks. The Large breed of chickens includes Orpingtons, which are valued for eggs and meat, and Cochins, a feather-legged variety used mostly for exhibiting.

Layer chickens such as Leghorns and Rhode Island Reds are used mainly for eggs. Kato said it usually takes a year for Layers to begin producing eggs, and after that, they’ll remain productive for 1 1/2 years.

Chickens have a lifespan of 8 years, and can continue to produce some eggs up to age 6. Still, Kato advises chicken farmers to add younger chickens from time to time to maintain the production cycle.

The bee and chicken workshop, called “Swarmers and Squawkers,” was one in an occasional series sponsored by LBO at their community gardens. The classes are free, however donations to LBO are always appreciated.